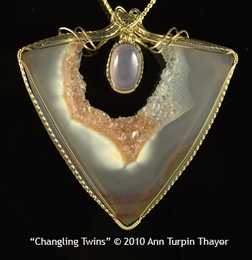 A breathtaking original, this two-piece showstopper is comprised of a opaquely-translucent Brazilian Agate with druzy and a Indonesian Lavender Chalcedony. The triangular agate is actually open along the middle section of the top, which allowed the Indonesian Chalcedony to be set suspended in the center.

This Slider/Pendant was exhibited from June to August in the 50th Anniversary Arizona Designer Craftsmen Juried Exhibition at Mesa Contemporary Art of Mesa Art Center, Mesa, Arizona The druze of the agate displays a complimentary peachy color to the lavender agate and suspends from my “Hidden Bail™” that enables use of an omega or thick chain, (sold separately). 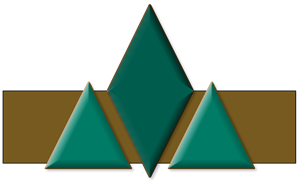 These works are sold and not for sale.
Top